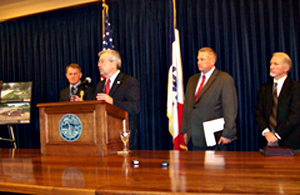 State officials today unveiled a “strategy document on water quality” that seeks to address farm practices as well as urban facilities owned by cities and businesses that have run-off that winds up in Iowa waterways.

“This is not about rules and regulations,” Northey says. “This is about giving farmers resources to help them voluntarily improve water quality.”

Lawrence cites strategies like reduced tillage of farm ground, so there is plant material left behind after harvest to keep soil in place as well as adherence to recommended application rates for farm chemicals — a process made easy with the GPS technology now installed in many pieces of farm equipment.

But the proposed state-led effort to improve water quality goes beyond farming and addresses practices in businesses and cities that can contribute to water pollution. Iowa Department of Natural Resources director Chuck Gipp says it became clear all parties that have the potential to pollute should be addressed by the plan.

“You reduce the opportunity for what we call the circular firing squad,” Gipp says, “where everybody simply points at the other as the problem.”

Governor Branstad stresses the voluntary nature of the plan.

“We don’t want to destroy the opportunity for farmers to make a living on the land. We also don’t want a lot of our cities to have to dramatically increase their property taxes at a time they have a lot of their citizens struggling,” Branstad says. “So we’re trying to come up with a thoughtful way that we can address the issues for the cities and for industry and for our agriculture producers and do it in a way that uses the best science.”

The “Iowa Nutrient Reduction Strategy” has been posted online — find it here — and there’s a 45-day period for Iowans to submit comments about the plan.

Gipp, Branstad, Lawrence and Northey made their comments this morning during a news conference in the governor’s office.