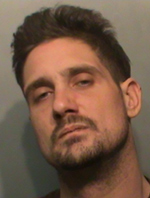 Des Moines Police have made an arrest in the capital city’s sixth homicide this year.

Police Sergeant Jason Halifax says the victim, 31-year-old Eric Naylor, was found at 12:30 a.m. near the intersection of East 17th and Walnut Streets.

Initially, responding officers were told Naylor had been shot. An autopsy revealed he actually died from being stabbed in the torso.

Investigators identified Ceretti as a suspect through witness interviews and Halifax says officers worked for 30 straight hours before they made the arrest. There’s no word on a motive.

“The motive, at this point, we’re not going to release,” Halifax said. “We do know they were acquaintances.” Naylor’s last known address is the same as Ceretti’s, but officers believe Naylor was staying at the residence off and on.

Halifax said investigators have not yet recovered the weapon used in the stabbing.