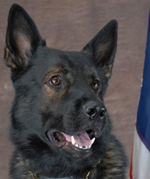 A central Iowa police officer and his K-9 partner have been honored with an award for a case that helped uncover a massive, nationwide drug operation.

Urbandale Police Officer Shane Taylor and his German Shepherd, Sabre, were called to a weighing station along Interstate 80 in Dallas County on October 15, 2011.

Officers were investigating what appeared to be a hidden floor in an enclosed trailer hauling a motorcycle. Sabre “alerted” on the odor of narcotics near the front of the trailer.

“Once we were able to get the floor pulled up, there was a duffle bag containing $180,000 (in cash),” Taylor said. “It was from the sale of narcotics on the East Coast and they were transporting the money back to California.”

The man who was hauling the trailer was arrested. About a week later, a truck hauling a horse trailer – also traveling from the East Coast to California – was pulled over near Atlantic. Taylor said that trailer also had a false floor, but nothing was found inside.

A tracking device was placed on the trailer, which went back to California and then to Reno, Nevada. “She was pulled over by a state trooper (in Reno) who was made aware of what was going on with this trailer,” Taylor said. “There was 250 pounds of marijuana – over one million dollars worth – in this trailer.”

The driver of the truck was identified as the mother-in-law of the man who was arrested earlier in Iowa. Taylor said authorities discovered the family-run marijuana operation in California financed the purchase of a $600,000 home and nearly a dozen expensive vehicles.

Officer Taylor and Sabre were recently awarded the “2012 Case of the Year” during an annual conference of the Heart of America Police Dog Association.