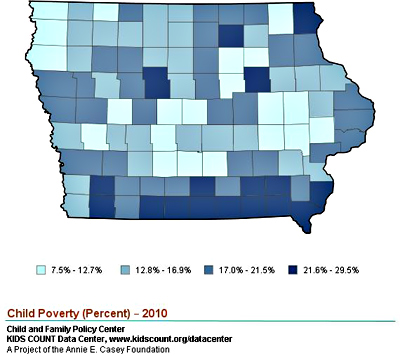 The director of Iowa Kids Count says the organization’s annual report shows the impact the down economy has had on the children in the state.

“The food assistance that families and children are receiving has tripled since 2000. In addition to that, the child poverty rate and free and reduced price lunch rate both have seen substantial increases during the last decade,” Crawford says.

The report says the number of people needing food assistance has gone up 196-percent since 2000.

All 99 of Iowa’s counties have been impacted, but some have been hit harder than others.

Those three cities are in Black Hawk, Scott and Polk Counties, three of the nine counties given the metropolitan designation because of their size. The others are Dubuque, Johnson, Linn, Pottawattamie, Story and Woodbury Counties. The statewide child poverty rate was 16.2- percent, compared to 10.8-percent in 2000.

Crawford says the economic impact that’s hit Iowa children has hit the rest of the country as well. “Granted the baseline they were using, 2000, was a good year economically for the country and for the state of Iowa. So using it for a starting point sometimes the data is going to look bad as you move 11 years into the future from 2000,” according to Crawford.

“There is one bright note, and that is the unemployment rate fell from 2010 to 2011 from 6.9 to 5.9-percent. And I realize that is not a large drop, but it is a drop none the less, so maybe the turnaround is happening for the state now.”

Other positives in the report showed in the health and education areas. “That’s kind of the flip side of it, the good side, is that the teen birth has decreased, child mortality indicators for the most part have decreased, which are good signs,” Crawford says.

The full Iowa Kids Count report is available online at www.cfpciowa.org. There is a link on the site to the report.