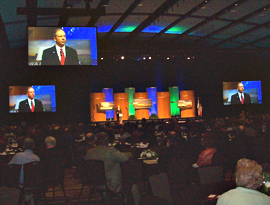 The president of the Iowa Farm Bureau is urging members of the organization to embrace proposed changes in farming practices designed to reduce run-off into Iowa waterways.

The voluntary plan unveiled a couple of weeks ago by Governor Terry Branstad and State Ag Secretary Bill Northey calls on farmers to take a number of steps to reduce soil and fertilizer run-off when it rains.

“Neither statement is complete or accurate in and of itself. It is in our best interest to engage in this water quality discussion.”

But Hill warns there is a “big task ahead” to come up with answers that can work in a state like Iowa with “unpredictable” weather patterns.

“We need progressive science and research,” Hill says. “We can’t gain new ground by returning to the past or standing still.”

Critics of the proposed water quality initiative accuse state officials of giving the Farm Bureau too much input in drafting the plan. Iowans can provide their opinions of the plan to state officials, as the public comment period is open through January 4 and Hill is urging Farm Bureau members to submit comments.

Hill made his remarks early this morning, during a speech at the Iowa Farm Bureau’s annual meeting in Des Moines.

His address was a sort of status report on farming in Iowa, including the state’s renewable fuels industry and two, new fertilizer production facilities.

“Never before has Iowa, at once, experienced so much prosperity and so much progress,” Hill said. “State of the art research has been the cornerstone for our advancement in technology, in higher yields, fewer inputs, more resilient genetics and the pathway to a progressive bio-economy.”