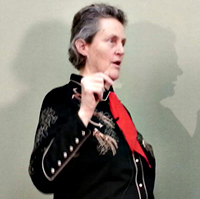 The designer of roughly half of the livestock handling systems used in North America spoke out against Iowa’s so-called “ag gag” law today during a speech before the Iowa Farm Bureau.

Following her speech in Des Moines, the 65-year-old Grandin met with the media and suggested those in the livestock industry should make their own videos to show the public. “You’ve got to take the mystery out of things,” Grandin said.

“If you don’t show it, then there’s going to be videos on the Internet showing all types of atrocious things going on and implying that’s standard industry practice.” Grandin, a professor of animal science at Colorado State University, said more public tours of confinement and kill operations would also be helpful – but she noted that can be difficult.

“There are some real logistical problems on taking tons of tours through these plants because they’re not set up for it,” Grandin said. “If you were to build a plant and set up for it with an enclosed, glassed-in catwalk that people could go on…these plants don’t have that. The other problem, with the cattle handling part, if you bring tons of people out there, it spooks the cattle and then they don’t go up the chute nicely.”

Grandin has served as a consultant to livestock companies and said while there’s still occasional animal abuse in the facilities, animals are treated more humanely than ever before. “Compared to the 1980s and early ’90s, things are wonderful. I can remember the bad old days – the ’80s and early ’90s handling of animals was horrible compared to today,” Grandin said.

“The quality assurance programs from both the beef industry and the pork industry, those programs have made a real positive difference.” Grandin said “constant management and supervision” of employees is possibly the best way to curb animal abuse in livestock operations.

“Many big plants have put in video cameras – Cargill and JBS Swift have video cameras that are (monitored) by auditors over the Internet, so at any time, they can look into that stunning box and see what’s going on,” Grandin said. “I’m a big fan of that because it prevents the problem of people hiding all the (abusers) when they know the auditor’s coming.”

In her speech, Grandin also spoke out against the use of sow gestation stalls and defended the lean, finely textured beef product that critics have referred to as “pink slime.” Her meeting with the media lasted 37 minutes and covered a wide range of topics from agriculture to autism to education.

Grandin’s life story was made into an HBO movie released in 2010. The film, titled “Temple Grandin,” stars Claire Danes as Grandin.