You are here: Home / News / No snow record on the verge of falling 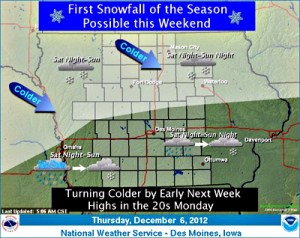 A new lack of snowfall record is about to be broken in Iowa just before a system moves into the state bringing a decent chance for a wintery mix of precipitation.

“We’ll tie the record Friday and break the record on Saturday for not having any measurable snowfall in the Des Moines area,” Vachelek said. “That may change on Sunday.”

Light snowfall is expected to begin falling across northern Iowa late Saturday, with mainly rain in southern Iowa. The rain could change over to a rain/snow mix by Sunday.

“As it stands right now, there’s a little bit of uncertainty at this point in time, we may pick up one to two inches from Highway 30 north to the Minnesota border and south of there, basically a half-inch or so,” Vachelek said. Much colder air will move into the state behind the system.

“The temperatures we’ve enjoyed in the 40s and 50s the past few days will settle into the 20s on Monday and may recover to the mid 30s by Tuesday,” Vachelek said.