You are here: Home / News / Missouri River levels cut despite calls for a boost 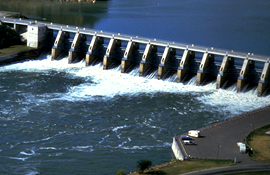 The U.S. Army Corps of Engineers continues to cut water releases from Gavins Point Dam into the Missouri River.

Jody Farhat, chief of the Water Management Bureau for the Corps in Omaha, says releases were taken down to 14,000 cubic feet per second (CFS) over the weekend.

“Our inital plan was to hold that just for three days before stepping down to 12 but we’re getting down to the level where some of the water intakes are coming into concern,” Farhat says.

“We’ll probably hold the 14,000 for five or six days, let that decrease get down past those water intakes and see if we are able to make any further reductions after that.”

By comparison, the average flow has been around 38,000 CFS but during last year’s record flooding, flow rates hit a record of 160,000 CFS. The current 14,000 is almost a trickle by comparison.

Farhat says low water is causing transportation issues on the Mississippi River, but they can’t really help with that. Several governors, businesses and farm groups are asking Congress and the Corps to boost water levels on the Missouri to help keep barges moving on the Mississippi.

“There is a lot of concern about the impacts of this reduction on navigation on the Mississippi River and we’re getting a lot of calls and monitoring that situation,” Farhat says. “In reality, Congress has not authorized us to operate this reservoir system for the Mississippi River, so, we intend to get down to our winter release rate and hold it there, unless something changes.”

Levels of the upstream reservoirs continue to fall. Farhat says that will be a balancing act all winter long. “Most of the reservoir storage is in the upper three, and those are currently between five and 14 feet below normal right now,” Farhat says.

“We’ll be moving water between the reservoirs over the winter period and by the start of next year’s runoff season, each of those upper three reservoirs will be between 10 and 12 feet below the desired operating level at the start of a run-up year.”

The Missouri River level at Yankton is now 16 feet lower than it was during the record flooding in the summer of 2011.