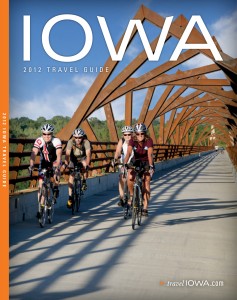 A contest is underway to select a photo for the cover of next year’s Iowa Travel Guide. The annual publication from the Iowa Tourism Office is distributed to thousands of people around the state, country and world.

Iowa Tourism Office spokesperson Jessica O’Riley says last year Iowans were presented with three possible cover photos and voted on their favorite. The 2012 cover ended up featuring the High Trestle Trail near Madrid. “This year, we’re taking it a step further and we’re allowing people to submit their photos for possible inclusion in the travel guide,” O’Riley said.

The contest is open to both amateur and professional photographers. O’Riley suggests submissions should capture the “spirit of Iowa.” That might involve a scenic landscape, a large crowd gathered at a tourist spot or a family picture somewhere in Iowa. “I certainly would not want to limit anybody…anything people see as they cross Iowa,” O’Riley said.

Contest rules and submission forms are posted on the Travel Iowa Facebook page. The deadline for submissions is next Friday, December 21. Finalists for the Iowa Travel Guide cover will be selected and then voting, via Facebook, will take place between January 23 and February 1. The cover design with the most votes will be declared the winner on February 4.

Photos that don’t make the cover could be used inside the travel guide or on the Iowa Tourism’s website or Facebook page.