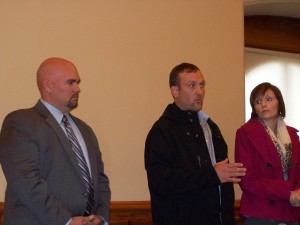 The parents of three children who were kidnapped, then murdered in Iowa met with Governor Branstad today to talk about reinstating capital punishment in Iowa. Drew Collins is the father of Elizabeth Collins, the girl who went missing this summer in Evansdale. Her body was found by hunters earlier this month.

“These people have no remorse,” Collins says. “…They are sitting in prison for life for killing one of our children and they get to celebrate every holiday…every birthday…and our children and other people’s children are no longer able to do that. That is just a shame and a crime.”

Donnisha Hill of Waterloo was kidnapped and murdered in 2006. Her father, Adonnis Hill, says he wants to try to save other parents from the pain he’s gone through.

“I have those pictures of my daughter etched in my brain and the brutality of it is overwhelming,” Hill says.

Andrew Christie’s daughter, Evelyn Miller, was kidnapped from her home near Floyd — in north central Iowa — and killed in 2005. Authorities this fall arrested a suspect. Christie sees the death penalty as justice.

“These people are committing crimes and they have nothing to lose by going from kidnapping to murder,” Christie says.

Noreen Gosch is the mother of Johnny Gosch, a 12-year-old West Des Moines paper boy who was kidnapped in 1982 and has never been found. She joined the other parents in talking with Branstad, then talking with reporters at the statehouse today.

“I have been in support of the death penalty, but we’re now going to be calling it capital justice,” Gosch said.

State Senator Kent Sorenson, a Republican from Milo, has pledged to be the primary sponsor of a bill that would impose the death penalty in cases of kidnapping and murder, plus impose new restrictions on sex offenders.

“From the short period of June of 2012 to October of 2012, there was 42 attempted abductions in Iowa. That’s just insane that we’re living in a society like that,” Sorenson said during the news conference. ” Obviously, what we’re doing in the state is not working. We need to look at legislation to improve the quality of life for our children, their safety and I’m willing to have that fight. I’m willing to have that discussion.”

Sorenson plans to hold another news conference in January, with the families, to announce details of the legislation once it’s drafted.

“I will fight as hard as I can for this family and for all these families and for the children of Iowa,” Sorenson said. “Do I believe we’ll pass legislation? I don’t know.”

Sorenson acknowledged it will be an “uphill fight” to even get the bill considered in the senate. Senator Rob Hogg, a Democrat from Cedar Rapids, will lead the Senate Judiciary Committee in January and Hogg does not plan to bring a death penalty bill up for debate.

Hogg opposes the death penalty. Senate Democratic Leader Mike Gronstal of Council Bluffs, the man who decides which bills will be debated in the senate, will not bring a death penalty bill up for debate.

“Every time there’s a particularly tragic and heinous murder, people come back and start talking about the death penalty,” Gronstal said today during an interview with Radio Iowa. “I think the death penalty’s immoral. I’m not going to move a death penalty bill in the senate.”

For about 30 years Governor Branstad has supported reinstating a limited form of capital punishment in Iowa, applicable in cases of kidnapping and murder, but Branstad has said the “political reality” is the bill won’t pass the senate.

AUDIO of 34-minute news conference with Senator Sorenson and the parents of children who’ve been murdered. 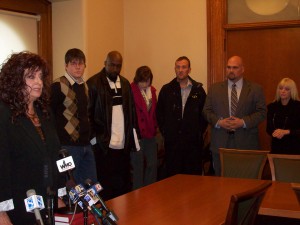