You are here: Home / Sports / UNI, ISU wrestlers look for success at Midlands 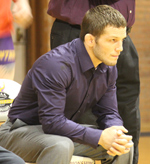 The Iowa State and Northern Iowa wrestling teams will be in Evanston, Illinois this weekend for the 50th annual Midlands Championships.

The two-day tournament at Welsh-Ryan arena is considered one of the toughest competitions of the season as many former collegiate All-Americans are in the field.

U.N.I. Coach Doug Schwab says the Midlands is one of the highlights of the year for the wrestling world. “It’s always been a big event…it’s always a tournament you really look forward to,” Schwab says. ”

It’s kind of a mid-season gage of where you’re at and where you want to get to. Almost every top team in the country is wrestling over these two days, so it’s great for wrestling. I’m looking forward to having some guys have a lot of success and bringing a lot of hardware home.”

This will be U.N.I.’s first competition since December 13, when the Panthers beat Ellsworth Community College in a dual 46-9. The Midlands will be the second two-day long tournament U.N.I. has participated in, as the Panthers took part in the Cliff Keen Invite in Las Vegas earlier this season.

“And now we’re putting ourselves in another tough tournament and giving our guys an opportunity to really set themselves up for the rest of the season and make a name for themselves nationally. That’s what we’ve been talking about trying to do all year,” Schwab says.

“I’m ready to get back…the break was way to long for me. We’re getting back at it now and I’m just looking forward to Midlands.”

Top-ranked Penn State is not competing in the Midlands. Instead, the Nittany Lions are wrestling in the Southern Scuffle taking place in Chattanooga, Tennessee next Tuesday and Wednesday (Jan 1-2). Neither U.N.I. or Iowa State are ranked in the top 25. Iowa State enters the Midlands following dual meet losses to Old Dominion and Iowa and a win over North Dakota State.

I.S.U. Coach Kevin Jackson says his wrestlers are improving as they continue to develop team chemistry. “I see a tighter connection with our team. I see some bonding going on and some more cheering for each other,” Jackson said.

“The guys are pulling together in building this team and building this program. These guys kind of started from scratch a little bit, as far as trying to build back the culture, tradition and mentality in which we’re founded on. I’m starting to see more of that and we just have to continue to build that.”

The second-ranked Iowa Hawkeyes are not sending a full team to this year’s Midlands Tournament. Only a handful of Hawkeye freshman are competing – including Cory Clark, who is considered a top contender at 125 pounds. Clark is 9-0 this season wrestling unattached behind two-time NCAA champion Matt McDonough.

The Hawkeyes host fourth-ranked Ohio State in a dual at Carver-Hawkeye Arena in Iowa City next Friday, January 4.

Find out more about the to Midlands Championships here: www.nusports.com/sports/midlands/nw-midlands-body.html#