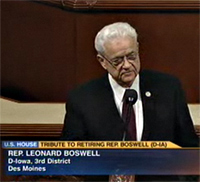 Congressman Leonard Boswell during a farewell tribute in the U.S. House.

Iowa’s congressional delegation has officially shrrunk from seven to six.

The people who were elected to the U.S. House of Representatives in November begin their two-year terms today.

Yesterday, Iowa had five men representing the state in the U.S. House, but today there are just four — Bruce Braley, Dave Loebsack, Tom Latham and Steve King. Iowa lost a seat in the House, due to the redistricting that occured after the 2010 Census.

The other two members of Iowa’s congressional delegation — U.S. Senators Chuck Grassley and Tom Harkin — were not on the ballot in November, but due to changes in senate membership, no other state has more seniority power.