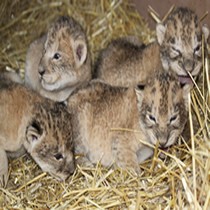 There’s a big fuss being made over four tiny, fuzzy critters at one of the region’s largest tourist attractions.

Four lion cubs are being seen by the public for the first time at the Henry Doorly Zoo in Omaha. Zoo director Dennis Pate says a total of five lion cubs were born there late last month.

“It’s exciting for us because it’s been 18 years since we’ve had (newborn) lions, 1994,” Pate says. “It’s been a long, long time and a lot of work on the part of the animal department to get the right male in, bring two females in. The females came from Idaho. Not sure where the male came from — Mr. Big — he’s a really big African lion.”

Four of the cubs are on display in the zoo’s Cat Complex with their mother. One female cub was smaller and is receiving extra care. So far, she’s thriving in the zoo’s hospital and will be introduced back with her mother and siblings once she is strong enough.

“They’ll be here for quite a while,” Pate says. “As they grow, I imagine we’ll move them over so they have the outside yard, a lot of room to run and play. They should be a lot of fun to watch as they grow up. By the time they’re 16 weeks old, they’re going to be moving around a lot. Come spring, summer, it ought to be the joy of Omaha to come down and watch these cubs play.”

The four cubs that are on public view now are very healthy, Pate says, as is the new mother.

The zoo also has four African lion adults, one male and three females. African lions are listed as “vulnerable” by the International Union for Conservation of Nature and Natural Resources.