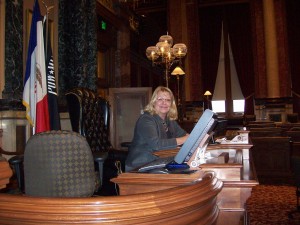 Thirty-five women will be serving in the Iowa legislature this year — and two of them will hold leadership positions.

House Republican Leader Linda Upmeyer of Clear Lake is entering her third year at that post.

Pam Jochum, a Democrat from Dubuque, will become the Senate President later this morning. She was selected by her peers in November, but there will be an official vote in the senate today to install Jochum to the #2 job in senate.

Women have held some of the top jobs in the legislature before, but it’s the first time in Iowa history that more than one woman has held a leadership position at the same time. Jochum reflected on this milestone during an interview with Radio Iowa.

“I think that what it is telling us is that we are finally getting to a point in Iowa where we are recognizing that regardless of whether we are men or women, we are all qualified to do these jobs and certainly it means we have probably put a few more cracks in that marble ceiling and woman are certainly being recognized for their leadership abilities,” she said.

Jochum suggested when it comes to the business of politics, “women are more interested in solving problems” than men.

“Women do come to the table with, sometimes, a different perspective about power and just rolling up our sleeves and getting the job done,” Jochum told Radio Iowa.

Jochum was first elected to the Iowa House in 1992. By the luck of the draw, Jochum sat beside Minnette Doderer of Iowa City. Doderer served a total of 34 years in the Iowa legislature. In 1975 and 1976, Doderer became the first women to serve as the senate president pro tempore.

“When she was one of few women serving in the legislature,” Jochum said. “…When I got to the House in 1993, she sort of adopted me as her daughter.”

Jochum has now reached the rung of the leadership ladder just above Doderer’s mid-1970’s achievement. Jochum served a total of 16 years in the Iowa House and has been a member of the Iowa Senate for the past four years. She considers her work in helping to create the “Iowa Public Information Board” as her proudest legislative achievement. Jochum is a graduate of Loras College in Dubuque and she worked there for eight years, but politics has been her main career.

“I have been involved in politics since I was 19 years old, so it’s kind of been part of my passion and…an important part of my life,” she told Radio Iowa. “I have always been heavily influenced in the ’60s, when I was in grade school, by the Kennedys and Martin Luther King and that whole notion that we’re part of something bigger than ourselves and that we have a duty not for others, but to others, and to society.”

Jochum, who is 58 years old, is divorced. Her 35-year-old daughter has a severe intellectual disability and still lives with Senator Jochum. Jochum said her daughter, Sarah, has “opened her eyes” to what most people take for granted in life.

“For example, I remember when one of our local providers was attempting to build a group home in a neighborhood some of the neighbors fought, not all of them, but some of them fought it pretty vehemently and thought that having adults with disabilities live in their neighborhood was going to devalue their property and they didn’t like the way they looked,” Jochum said. “It brought that whole notion of discrimination and so it’s really been a motivation to make sure that we give every Iowan an opportunity.”

Jochum describes her new role as senate president as sort of the “traffic cop” of the senate, ensuring the rules are followed during debate. She will also put her signature on all the bills that are passed from the senate to the governor for his signature or veto.