You are here: Home / News / Obama’s Iowa campaign manager in DC for inaugural 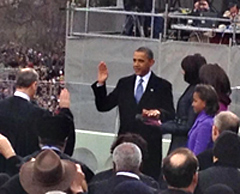 The manager of President Obama’s 2012 Iowa campaign was among the throng in D.C. who watched Obama take the oath of office and deliver his second inaugural address.

Brad Anderson stood on the mall, with thousands of other people.

“Truly an amazing day. It really was,” Anderson says. “I mean everybody was clearly celebratory, but we were also paying close attention to the important message that the president had to deliver.”

Obama’s first inauguration seemed “chaotic” compared to the second according to Anderson.

“Everybody and I mean everybody was in a good mood,” Anderson says. “Even the people that were waving the wands through the mags when you were ready to enter, you know, they were all telling jokes and smiling and just in a great moood and it was really just an amazing event.”

Anderson and his wife, Lisa, are still in Washington, D.C. to attend the last inaugural ball of them all — the one for Obama campaign staff that will be held this evening.

“The staff ball was an absolute highlight in 2008. Jay Z surprised us all by performing for about an hour and I have heard that there is going to be a surprise musical guest this staff ball,” Anderson says. “I don’t know who it is, but I expect a big name.”

Anderson was the communications director for Obama’s 2008 Iowa general election campaign. On January 10, Anderson announced his intentions to run for office himself, seeking the job of Iowa secretary of state. Republican Matt Schultz is Iowa’s current secretary of state.