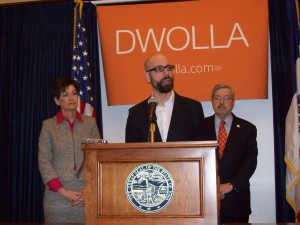 The State of Iowa is partnering with an Iowa firm that processes financial transactions to offer a low-cost option for businesses that submit cigarette taxes to the state. Dwolla charges just 25 cents for a transaction that’s over $10, far less than credit card fees which range up to three percent of the total payment.

“Dwolla is a payment network that essentially utilizes the Internet instead of plastic cards,” says Ben Milne, Dwolla’s founder and CEO. “It removes a lot of the fees and architecture costs of traditional networks, which for businesses paying the state government means faster payments at a lower cost, with more security than other payment options.”

Retailers must acquire a tax stamp for each unit of tobacco sold, be it a single cigar or a carton of cigarettes.

“This is sort of a just-in-time inventory mechanism that the businesses need to use because these stamps are relatively expensive and they don’t want to keep them in their inventory,” Decker says. “By using Dwolla, this is going to allow them to pay for the stamps in a way that allows the stamps to be sent to them much more quickly.”