You are here: Home / News / Party insiders: “There comes a time” for GOP to support same-sex marriage 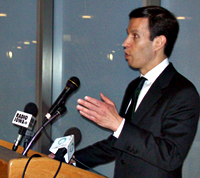 About 30 Iowa Republicans met early tonight in Des Moines, the beginning of a more public effort to get the GOP to embrace marriage rights for same-sex couples.

“But I think there comes a time for everybody where, particularly for me on this issue, you need to step to the front of the room,” Kochel said.

Tom Synhorst, a former aide to Senator Chuck Grassley and Bob Dole’s 1988 Iowa Caucus campaign manager, was there, as was Eric Woolson, the manager of Mike Huckabee’s 2008 Iowa Caucus campaign. On Tuesday, Woolson called Radio Iowa to say he was only at the event to see keynote speaker Ken Mehlman, with whom Woolson worked on a campaign 12 years ago. Woolson would not say whether he supports or opposes same-sex marriage, saying he is not working in politics anymore.

Mehlman lived in Iowa for six months when he worked on George W. Bush’s first campaign. Mehlman, who later served three years as chairman of the Republican National Committee, returned to Iowa for tonight’s event.

“How can smaller and less intrusive government not include the right to choose the person that you would like to marry?” Mehlman said during brief remarks at the gathering. “…How does standing in the way of two adults who love each other not discourage rather than promote family values?”

In 2010, Mehlman became one of the most prominent Republicans in the country to public acknowledge he is gay.

Kochel, the Iowa-based political operative, told the crowd the GOP needs to be a “more modern party” and that includes moving to support same-sex marriage.

“We need to embrace points of view that aren’t always the ‘legacy’ position of the party. We’re going to have people in our party who disagree. Every party does,” Kochel said. “…It’s time to update our message. It’s time to reach out, be more inclusive.”

Kochel asked the people in the room to “find other Republicans” who would join the conversation. A few were long-time party insiders, like Steve Roberts, a former Iowa Republican Party chairman who served on the Republican National Committee for a couple of decades. Kathy Potts, a Cedar Rapids-area organizer for Rick Perry’s 2012 Iowa Caucus campaign was there as well.

The event was sponsored by Iowa Republicans for Freedom. Former State Senator Jeff Angelo, a self-described Evangelical Christian conservative who once sought to amend Iowa’s constitution to ban same-sex marriage, is the group’s founder.

“I began this organization just a couple of years ago in order to give a voice to limited-government, pro-family Republicans who are in favor of the freedom to marry in Iowa,” Angelo said.

The Iowa Supreme Court issued a ruling in 2009 that legalized same-sex marriage in Iowa. Mehlman told the crowd it “makes Iowa a better place to live.”

(This story was updated on Tuesday after Woolson’s call to Radio Iowa.)