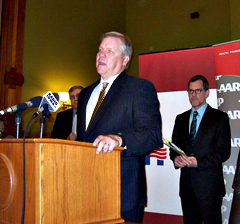 Iowa Hospital Association president and CEO Kirk Norris said it will help reduce costs, because those uninsured Iowans will get regular check-ups and won’t wait ’til they’re really ill and show up in the emergency room for care.

“It will lead to improved health of those 90,000 Iowans,” Norris said.

Expanding Medicaid to cover more people is part of the federal health care reform law — a means of getting uninsured Americans health care coverage. Governor Branstad has repeatedly said he is opposed to expanding the number of Iowans who qualify for Medicaid.

And Branstad has said he doesn’t trust the federal government to keep its promise to send states the money to provide that coverage.

“We think we need to look at better choices that can give us a healthier state than just buying into something that we think is unafforable and unsustainable,” Branstad said Monday.

Norris said he is “confident” the federal government will send states like Iowa the money as long as Barack Obama is president.

“Every year in a democracy, people have to fight for their priorities,” Norris said.

Norris was joined today at a statehouse news conference by representatives of the 48 groups who’re publicly signally their support of expanding Medicaid coverage to 90,000 more Iowans.

“One of the reasons why you have all the groups represented here is Medicaid does not historically have a constituency that can come to the statehouse. These are low income folks with limited resources and they don’t hang around rotundas,” Norris said. “…I’m 100 percent confident those organizations will be there, speaking on thei behalf, just as they have been for the last 50 years.”

“Just two months ago Pope Benedict told a meeting of health care workers that good health is a benefit that needs to be defended and guaranteed for all people, not just those who can afford it,” Chapman said.

According to AARP state president Tony Vola, more than 17,000 Iowans between the ages of 50 and 64 who have no health insurance today would be able to get coverage through Medicaid if Branstad were to change his mind.

“That, if you look at it in perspective, is equivalent to a city the size of Coralville or Johnston,” Vola said.

A recent poll conducted for the American Cancer Society’s Cancer Action Network found 57 percent of Iowans support expanding Medicaid to cover more uninsured Iowans, most of whom have a job, but don’t have health insurance as a benefit.