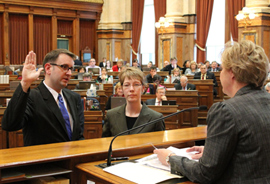 State Representative Todd Prichard takes the oath of office in the Iowa House of Representatives. His wife, Ann, is holding the bible.

At about four o’clock yesterday afternoon the Iowa House finally had 100 members.

Ninety-nine state representatives took the oath of office on January 14, but Todd Pritchard of Charles City wasn’t sworn in as a member of the House until Tuesday.

“I’m going to play catch-up. I’m going to do my research and I’m ready,” Pritchard said of his rookie status, “I’ve got an uphill battle, but we’re ready.”

Pritchard, a Democrat, won a January 22 special election for a House seat that became vacant when the man who won it in November’s election resigned in December.

Pritchard met many of his colleagues for the first time and settled into his House desk Tuesday. Today Pritchard will start going to committees and voting on bills.

“So I’ll start drinking from the fire hose, as they say,” Pritchard told Radio Iowa, with a laugh.

Pritchard had been serving as the Assistant Floyd County Attorney. He now represents an Iowa House district that covers Chickasaw and Floyd Counties as well as portions of Cerro Gordo County.

“I think I bring some good experience to the table as a lawyer, a prosecutor and as a veteran,” Pritchard said Tuesday.

Pritchard is a major in the Iowa National Guard and has been deployed four times. He was in the unit that served 15 months in Iraq — the longest deployment in modern history for any unit in the U.S. military.