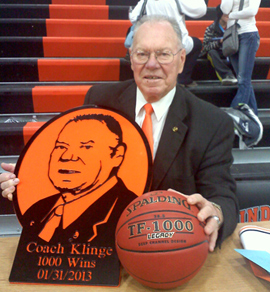 It was the fourth attempt at the milestone.

Waukon had lost two straight games and had a third game canceled due to weather.

“It’s a tremendous accomplishment I know that, it’s something I don’t mean to make light of at all, but I said it was going to happen, it was just a matter of when. For awhile I thought it might not be until next year,” Klinge says.

Klinge is in his 51st year of coaching, including the first 41 at West Central of Maynard.

“Records are made to be broken and somebody will probably break it some day,” Klinge says. He says with the rules allowing only 21 games, it may take someone awhile to build one thousand wins.