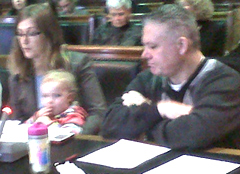 A legislator who’s a registered nurse plans to push forward with a bill to make it clear female prisoners at the end of a pregnancy are not to be placed in restraints.

About two dozen people gathered at the statehouse Monday for a public hearing on the policy. Dan Copeland, the husband of an inmate who gave birth in 2010 about eight months after she entered prison, read a statement from his wife.

“It’s important that this issue be addressed,” she wrote. “I understand security. I truly do, but what happens when security isn’t needed and compromises the safety of my baby or myself during the pregnancy or after?”

A doctor at the University of Iowa Hospitals in Iowa City submitted a written statement, saying she does not feel restraints are required when she’s delivering the baby of a pregnant prisoner. Rita Bettis of the American Civil Liberties Union of Iowa called restraints during the latter stages of pregnancy “cruel and unusual punishment.”

“The vast majority of female prisoners are non-violent offenders who pose a low security risk,” Bettis said, “particularly during labor and postpartum recovery.”

Others raised concerns pregnant prisoners forced to walk into the hospital in shackles, with their hands cuffed to a chain around their belly, could lose their balance, fall and hurt their baby. County sheriffs and city police chiefs raised concerns, too, worrying they might be sued if they put a violent woman they’re arresting in cuffs and restraints, only to find out later she’s pregnant. Patti Wachtendorf, warden of the women’s prison in Mitchellville, defended prison policies.

“I don’t want the Department of Corrections to be viewed as barbaric…’cause we’re certainly not,” Wachtendorf said. “We want to make sure that the women are protected. We want to make sure the babies — they’re the innocent ones — are protected…. but we also have to balance the public safety. We’re taking women out into Iowa City, where the public is.”

The warden said her staff is “very respectful” of a pregnant prisoner and her unborn child.

“But….it’s my job to be respectful of the public as well, or I’ll be in front of you some day — which I hope I never am — defending how something happened,” Wachtendorf says, “and we all hope those things don’t happen, but it’s my job to think about those things that can happen.”

Fred Scaletta of the Iowa Department of Corrections also revealed a new, two-week old policy no longer requires the shackling of a female prisoner in the hospital either during or right after delivery of her baby. But Scaletta is asking legislators not to pass a bill that puts the policy in law.

“We need to have the discretion to make decisions based on what the security level and status is of these people,” Scaletta said.

But Representative Linda Miller, a Republican from Bettendorf, will continue working to pass a law.

“Once you get things ironed out, these people aren’t that far apart,” Miller told reporters after the hearing. “They really aren’t, other than the fact he doesn’t like to be told what to do.”

Miller oversaw the operating and delivery rooms when she worked at a small hospital in Minnesota.

“I’m a mother of six. I have triplet daughters,” Miller said. “I’ve been really pregnant and there’s got to be a way to do it with best practices and what other states are doing.”

According to the American Civil Liberties Union, 18 other states have laws that forbid shackling pregnant prisoners. Miller plans to have another public hearing on the bill before it could clear a subcommittee in the House.