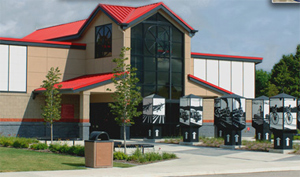 Some legislators are raising concerns about extravagant state-run interstate rest areas, but a bill to reign in Department of Transportation authority to build new rest areas has stalled in the Iowa Senate.

The bill would have required rest area decisions to be based solely on the cost, but Michael Kennerly, the director of the Iowa DOT’s office of design, said Iowa could lose federal financing for rest area projects because federal rules do not allow cost alone to be the primary factor in opening or closing rest areas.

“Sometimes I think the DOT has an image problem with building Taj Mahal-type rest areas that are wasteful for the taxpayer,” Zumbach said.

The DOT’s Kennerly admitted his agency has an “image problem” with two rest areas being built just north of Ankeny on Interstate 35, but he stresses the rest areas are also a place to “sell” the state.

“You know, when you look at the rest areas, each of those rest areas has theme unique to that area and it tells a story about Iowa,” Kennerly said, “a story that people passing through our state may not recognize and/or appreciate about the state.”

One of the new Ankeny-area rest areas will showcase Iowa agriculture. The other will tout Iowa State University, where the computer was invented. Senator Zumbach said those rest area projects are even more controversial when a state gas tax hike is under consideration.

“The whole conversation about a possible gas tax coming in with a huge influx of money, it opens the door for at least an image — maybe not the reality — of wasteful spending,” Zumbach said.

The bill about rest areas failed to pass a senate subcommittee, however, and will go no farther. The bill would have forbid construction of new rest areas unless it was more expensive to fix up a current rest area.