You are here: Home / News / King says he won’t be bullied out of running for U.S. Senate 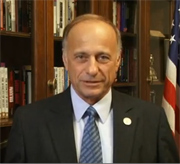 A threat from GOP strategist Karl Rove makes it more likely rather than less likely that Republican Congressman Steve King will run for the U.S. Senate.

Rove has vowed to spend millions in primaries to defeat ultra-conservative candidates, as Rove contends candidates like King cannot win a General Election. King said no one is going to bully him out of running for the U.S. Senate.

“This is a decision for Iowans, not someone who happens to have a checkbook,” King told Radio Iowa.

King sent an email to supporters on this morning, saying he was “under attack” from a “crusade” led by “Karl Rove and his army.” King asked his own supporters to make a campaign donation, to “show Rove he cannot decide my political future.”

“We’re going to have to have a battle in the court of public opinion until it’s clear that Iowans will make the decision on their nominee for the United States Senate and that will set a precedent for the rest of the country,” King said. “It’s that important.”

King isn’t yet ready to officially declare himself a candidate for the Senate, however.

“It’s gotten closer each day, but I wouldn’t want to imply that the decision is made. It’s not,” King said. “It will be made by a thorough analysis of county-by-county, and all of the resources necessary to run a race of this magnitude.”

King spoke with Radio Iowa by phone late this afternoon. He was at Camden Yard in Baltimore, attending a Heritage Foundation retreat. Steve Forbes, the two-time presidential candidate, was the keynote speaker.

U.S. Senator Tom Harkin announced in late January that he would not seek reelection in 2014.  Earlier today, Congressman Bruce Braley announced he has filed the paperwork to set up his own campaign the Senate. Braley spoke with Radio Iowa this morning.