You are here: Home / News / Push to require helmets for teenagers on mopeds 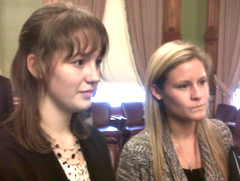 Two young women who were unsuccessful last year in convincing senators to pass a bill requiring helmets for moped riders under the age of 18 were back at the statehouse Thursday afternoon.

Leah Murray is a student at Hope College in Michigan, a state that has mandatory helmet laws.

“When we see someone with a helmet on, when they’re on their moped, we comment and say how great that is and we have friends that are like, ‘What do you mean? Everyone should be wearing a helmet.’ And that just shows you how normal it is those who live in states with helmet laws,” Murray told reporters, “and we hope it’s that way in Iowa someday soon.”

Murray and Olivia Lofgren, a student at St. Ambrose University in Davenport, failed to convince a three-member panel of senators to give their mandatory moped helmet law a green light last year. They’re motivated by the death of an Iowa City West High School classmate who died in a moped accident in August of 2011.

“She was not wearing a helmet that night. Caroline (Found) was the leader of our school. She lived each day to the fullest, not mention her infectious laugh that could light up a room instantly,” Lofgren said today, sniffling as she spoke to senators. “Her loss took a toll on us, our families, our community. In order to prevent others from going through what we have experience, we have teamed up with the Brain Injury Alliance of Iowa to present our campaign: ‘Hope for a Helmet.'”

The two women, along with the executive director of the Brain Injury Alliance, testified during a public hearing at the statehouse. Geoffrey Lauer told lawmakers rising gas prices have helped spur moped use.

“There are 95,000 Iowans already living with long-term disability from brain injury,” Lauer said. “We don’t want to add any more.”

Two senators signed off on the bill to require helmets for teenagers riding mopeds. Senator Matt McCoy, a Democrat from Des Moines, said the proposal “makes perfect sense” to him.

“This is a statement that this legislature should make about our children and the value we place upon our children in the state,” McCoy said.

Mark Maxwell, a member of ABATE of Iowa — representing motorcyclists, told lawmakers his group is “adamantly opposed” to the bill.

“Helmet laws do not stop crashes,” Maxwell said. “Training and education is what stops crashes.”

The bill faces an uncertain future. The chairman of the Senate Transportation Committee told reporters he’s not sure the bill has enough votes to clear his committee.