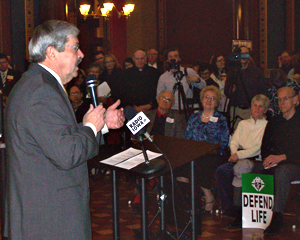 Governor Branstad speaks at a pro-life rally at the state capitol.

Abortion opponents rallied at the Iowa capitol this afternoon, although Iowa’s Republican governor acknowledged to reporters this morning that new abortion restrictions are unlikely to win approval in the Democratically-led Iowa Senate.

Governor Terry Branstad told rally-goers it’s “difficult” to think that 40 years have gone by since the “Roe v Wade” decision legalized abortion in the U.S.

“But I have seen progress and I have seen — as we’ve seen the advance of medicine and children being able to survive outside the womb at a younger and younger age — that more people are getting it and understand the importance of life and that it needs to be protected from conception,” Branstad said.

Lieutenant Governor Kim Reynolds urged rally-goers to go back home and “hold up” as examples those who volunteer at crisis pregnancy centers and other non-profit groups serving women who would otherwise get an abortion.

“I truly believe that the pro-life movement is a pro-woman movement,” Reynolds said, getting applause from the crowd. 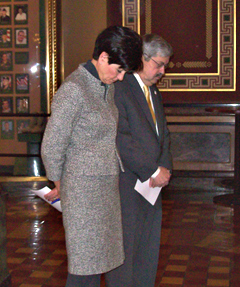 Daniel McConchie of Americans United for Life was the event’s keynote speaker.

“Lord I pray that all across our nation that there would be a great awakening,” Rude said. “I pray that Roe v Wade would be overturned, Lord.”

In addition to the governor and lieutenant governor, Iowa Secretary of Agriculture Bill Northey attended the rally, as did 30 of Iowa’s 150 state legislators.