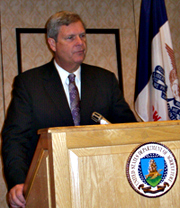 U.S. Ag Secretary Tom Vilsack is asking Iowa legislators to pass a resolution expressing support for the ethanol industry and the federal rule that requires a certain level of ethanol be produced each year.

“It’s very, very important that we preserve that renewable fuel standard and….legislative leaders in states like Iowa, I think, have a vested interest in making it known what their feeling is and I just respectfully suggested one way to do would be a resolution here in the legislature that saying, ‘Hey, we support the renewable fuels standard,'” Vilsack said this morning. “I don’t know if they’ll take it up or not, but I hope they do.”

Vilsack, a Democrat who served as Iowa’s governor for eight years, met privately this morning with Democrats and Republicans serving in the Iowa legislature and one of the topics Vilsack discussed was renewable fuels.

Oil-state senators are pushing legislation that would get rid of the renewable fuels standard. Critics say it artificially props up an industry that can’t make a profit without federal intervention.

Vilsack is also warning state officials looming federal budget cuts may have an impact on state programs that get federal grants or federal funding. Vilsack said he’s carefully drawing up the budget cutting plans for the U.S.D.A., as miscalculations could mean legal problems in the future.

“Unlike a shut down where you know eventually the budget’s going to come back up and you’re going to have adequate resources, this is really about reducing the budget, so you’re not assured that the monies that are going to be cut through sequester are ever going to be replaced,” Vilsack said, “so it’s important that you calculate it right and that you implement it right, because you could be faced with anti-deficiency violations, for which there are civil and criminal penalties.”

If congress and the president cannot agree on an alternative plan, across-the-board cuts in the federal budget will take effect March 1.

“If you have an area of the budget, like food safety, where you have no flexibility because there are very few lines in that budget, and it’s predominantly labor, you’re faced with a very serious circumstance in terms of people like inspectors,” Vilsack said.

According to Vilsack, a better approach would be to give federal agency leaders like himself the authority to make selected cuts rather than an across-the-board cut and Vilsack said “it’s frustrating” that congress hasn’t at least taken that step.

“What’s interesting is people are concerned about the consequences of sequester and the solution is for congress to do its job,” Vilsack said. “They have the power to stop this.”

President Obama again today asked congress to delay the across-the-board cuts and, instead, pass a smaller package of spending cuts and tax increases. Republicans in congress say they’re not interesting in raising taxes.