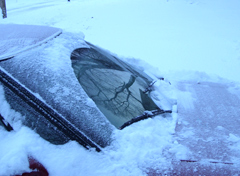 Snow is moving across Iowa, covering cars and roadways and making travel difficult.

The Iowa Department of Transportation’s is reporting roadways completely covered with snow in south central and southeast Iowa and partially to mostly covered in central Iowa.

The National Weather Service has a winter storm warning in place for south central and southeast Iowa until 6 a.m. Wednesday.

“In the southeast we may see upwards of about six to 10 inches now. The storm system has actually taken a little wobble back to the northwest and that’s pushed the better what we call lift into Iowa, and also the better snow production,” Vachalek says.

“In the southeastern counties especially we’re looking for the potential for that very heavy snow and also strong winds developing in much of the state today.” He says the strong winds could make for some tough driving conditions, even in the areas that don’t get as much snow. 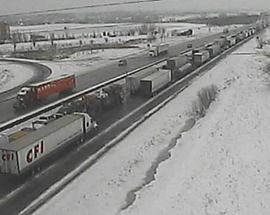 A DOT camera shows traffic backed up on I-80 near Urbandale due to an accident.

Vachalek says once the winter weather system pulls out of here by later tonight we should be in for some quiet weather.

“Temperatures will be moderating or at least continuing to move back into the 30’s and we should have some fairly quiet weather moving into the weekend,” Vachalek says.

Iowa State Patrol Trooper Jason Marlow is reminding motorists what to do if the find themselves stranded or in an accident. “The biggest thing to do is remain with your vehicle,” Marlow says. “Have that cell phone with you and make that 911 call.”

He says tow bans may be in place, so motorists involved in a crash may have to wait a day or two before they can retrieve their vehicle.

Many roads are described as completed covered with snow and gusty winds have reduced visibility in areas, so Marlow is encouraging Iowans to postpone their travel plans if possible.

“If you have to be out, make sure you turn your headlights on,” Marlow said. “Although it may not help you see a whole lot more, it’s going to allow you to be seen by the other cars out on the road with you.”

Pat Powers of KQWC in Webster City and Steve Smith, KMCD in Fairfield,  contributed to this story.