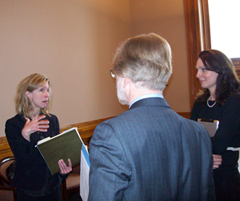 A bill that would prohibit teenagers from using tanning beds has won initial approval in an Iowa Senate subcommittee.

Dr. Leslie Christenson of Ames, a dermatologist, says the ultraviolet rays from tanning beds are “a known carcinogen.”

“Right up there with tobacco and asbestos,” Christenson says. “The interesting thing is, however, that the FDA regulates them as a Class 1 Medical Device, which is the same as band-aids and…tongue depressors, so we’re a bit behind in how we regulate these.”

Dr. Christenson did research on the issue when she worked at the Mayo Clinic and found cases of melanoma skin cancer among young women had increased 50 percent over the past three decades.

The bill under consideration in the Iowa Senate would prohibit anyone under the age of 18 from using a commercial tanning bed.

“In Iowa, you cannot receive a tattoo if you’re under the age of 18. You can’t have body-piercing without parents permission. We don’t permit people to buy cigarettes under the age of 18, alcohol under the age of 21,” Walton says. “There are examples in the interest of the public health that say that a ban like this is a good idea.”

But the move has its critics, like Senator Nancy Boettger, a Republican from Harlan.

“If it’s a bad thing, let’s just ban it for everybody, but if not, I think it’s the parent’s responsibility,” Boettger says. “Laying on a tanning bed is not as dangerous as having an abortion and we allow that to happen.”

Boettger also warns there’ll be a “revolt from prom-goers” if the bill becomes law.

Matt Eide, a lobbyist for the American Suntanning Association, says the tanning bed industry has its own experts who’d like to speak with lawmakers.

“We believe that this type of ban will move teenagers to aggressively suntan outdoors and/or turn to unregulated home tanning units where the dangers and risks are higher than we have now with the regulated industry.”

Democratic Senator Herman Quirmbach of Ames, the bill’s sponsor, scoffs at that.

“Outdoor tanning does occur a few months out of the year here,” Quirmback says, “but I doubt that it’s very likely to happen in February.”

Quirmbach and another senator signed off on the bill this morning, making it eligible for committee debate next week.