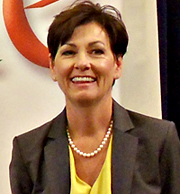 Congressman Tom Latham, considered the early Republican favorite, now says he will not run for the U.S. Senate seat being vacated by Democrat Tom Harkin.

It opens the door for other Republicans, including Lieutenant Governor Kim Reynolds and Congressman Steve King. Reynolds spoke with reporters this morning on a conference call during her trade mission in the Philippines.

“I’m focused on this,” Reynolds says. “I’ll take a serious look at it. I will continue to do that. It’ll start with sitting down with Congressman King and having a great dialogue with him. He’s served as my congressman for several years and he’s a friend. We’ll take a look at that later but right now, I’m concentrating on leading a trade mission.”

The lieutenant governor left for Vietnam and the Philippines last week with about 20 other Iowa government, industry and business leaders. The delegation is due to return on Saturday.