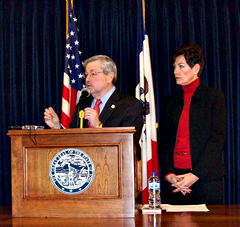 Iowa’s Republican governor says his plan to provide health care coverage to about 90,000 low-income Iowans could be a model for national reform of Medicaid.

Governor Branstad calls it the “Healthy Iowa Plan” and it’s similar to a program in Indiana.

“The coverage is not as rich as it is under the federal program, but then again…it doesn’t put Iowa at as much risk, I guess — and the nation, for that matter — with regard to an unaffordable, unsustainable program,” Branstad says. “And we can see what’s going on in Washington today and it’s just going to get worse and worse and worse.”

Branstad has resisted Democrats’ calls to expand Medicaid to cover up to 150,000 more Iowans, arguing the state can’t trust the federal government to pay the entire bill.

Under Branstad’s “Health Iowa Plan,” Iowans who live at or below the poverty level would get a state subsidy to buy private insurance.

“If you have no skin in the game, if somebody else is paying the whole cost of it, it’s like former Tim Pawlenty from Minnesota said, it’s like going to a wedding where you have an open bar versus a cash bar,” Branstad says. “There’s going to be a whole lot more liquor consumed with an open bar.”

State subsidies to “Healthy Iowa Plan” participants would increase if they take steps to live healthier lives, like undergoing a health risk assessment.

“It encourages people to make healthy choices rather than just provide a blanket entitlement,” Branstad says.

State officials will submit a waiver to the federal government in May or June, hoping to get approval to run this program. The “Healthy Iowa Plan” would replace the current “Iowa Care” program, which expires December 31. It has provided health care coverage to about 70,000 Iowans. Those are all people who live at or below the poverty line. Branstad says other low-income Iowans who live just above the poverty line would be able to buy private insurance and get a tax credit equal to the premium cost.

“Right now Medicaid is where welfare was in the ’90s,” Branstad says. “It’s a broken system. It’s unaffordable, unsustainable. We need to come up with a new model.”