You are here: Home / News / Grassley participating in hearing on airline merger 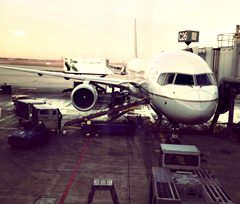 Iowa Senator Chuck Grassley is raising questions about how the latest proposed merger of two major airlines will impact rural America and the economy.

Grassley, a Republican, is taking part in a hearing of the Judiciary Subcommittee today to look into the looming partnership between American Airlines and U.S. Airways.

“Currently the two airlines serve five airports in Iowa,” Grassley says. “We’ve got a big concern about what this might (mean) to transportation in and out of Iowa.”

There have been no specific threats by either airline, Grassley says, to eliminate routes that currently serve Iowa, but that’s one of his primary fears.

Grassley says, “The merger needs to be evaluated to determine that the transaction will not consolidate the airline industry so it will inhibit free and fair competition, hence, the hearing before the subcommittee on anti-trust policy.” Competitive air service is directly related to the economic prosperity of our less populous towns, he says, and this merger may not bode them well.

“Further consolidation of the airline industry raises questions about the effects on air travelers in small cities and rural communities, both in terms of cost and service,” Grassley says. With the weakened economy, he says threats of route elimination, cutbacks in service and higher airfares could all harm those smaller, rural communities and their economic development.

There have been two other big mergers in the airline industry in recent years: Delta and Northwest merged in 2008, while United and Continental paired up in 2010.