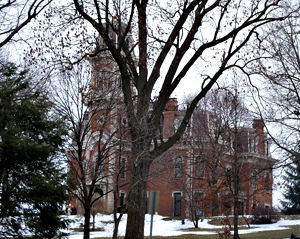 A group of Iowa students who missed out on a scheduled tour of the White House in Washington, D.C. have been offered a “behind the scenes” tour of the governor’s mansion and the state capitol in Des Moines.

Students at St. Paul’s Lutheran School in Waverly had tickets to tour the White House March 16, but White House tours were cancelled when federal budget cuts went into effect March 1.

Tim Albrecht, the communications director for Governor Terry Branstad, says the governor hopes his offer is a “small consolation” for missing out on the White House.

“I think it’s a good contrast to Washington, D.C. which governs by sequester, fiscal cliff and budget cuts,” Albrecht says. “Whereas here in Iowa we’ve turned the ship around under Governor Branstad’s leadership, working with both Republicans and Democrats.”

Branstad has set aside time next Thursday to give the students a tour of the governor’s mansion and his formal office at the statehouse.

“This tour is going to have it all. It’s going to have the governor, the lieutenant governor. I’m hoping the first lady will be able to be involved,” Albrecht says. “It’s just a great way to showcase one of Iowa’s wonderful treasures in Terrace Hill and, of course, the capitol building which is as beautiful and ornate as it’s ever been.”

The capitol building was completed in 1886 and its dome is covered in sheets of real gold that are thinner than aluminum foil. Terrace Hill, the governor’s mansion, was built in the late 1860s by Iowa’s first millionaire. It was donated to the state more than a century later and Iowa’s governors began living in the mansion in 1976.

The students from Waverly started a Facebook page in February to lobby for reinstatement of the White House tours and their story made national headlines.