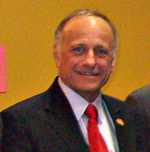 Republican Congressman Steve King has paid for new public opinion polls in Iowa to test his chances in a statewide race for the U.S. Senate, but King said today he hasn’t analyzed the data yet.

“If you live in this state for as long as I have and traveled this state as much as I have, it’s hard to be surprised by the polling, I’ll say that,” King told reporters this morning.

King said he won’t make the decision solely based on what the polls say, however.

“I have thrown a bid into the trash even though the numbers all looked good because my gut’s told me, ‘This isn’t right,'” King said. “…Then there’s the other component of that which is the heart and anybody that’s looking at a U.S. Senate race better be thinking they have enough heart to race through the next 19 months or so full speed.”

King has publicly said he was thinking about running for governor or for the U.S. Senate in the past, but has always opted to stay in the U.S. House. King acknowledged his political brand could be damaged if he again decides not to seek higher office.

“It’s hard to measure political capital,” King said. “It comes and goes over a lot of things. It could be issues, current events. It could be speculation and so there’s a possibility that that’s the case. It’s not much of a consideration, but it’s a possibility. I wouldn’t deny it.”

Democratic Senator Tom Harkin announced in late January that he would not seek reelection in 2014, creating an open race for the U.S. Senate. King said there “won’t be a better” chance for him to run for the U.S. Senate than in 2014.

“I’ve never wanted to be the guy who looked back and said: ‘Woulda, coulda, shoulda,’ either, so that’s part of the consideration as well,” King told reporters this morning. “This is by far the most positive kind of an opportunity for a senate seat that I’m likely to ever see or was likely to see.”

King, who is 63 years old, has served in the U.S. House since January of 2003. Democratic Congressman Bruce Braley announced in early February that he will run for the U.S. Senate.