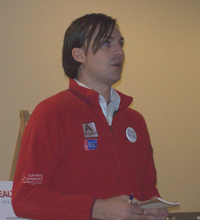 A coalition of 23 groups that support letting up to 150,000 more Iowans get government-paid health care coverage through Medicaid plans a statewide public relations tour to make their case.

Republican Governor Terry Branstad has repeatedly said the state can’t depend on the federal government to pay the full cost of covering more people under Medicaid.

“We have developed an alternative which we think is better — The Healthy Iowa Plan,” Branstad said this morning during his weekly news conference.

“We think it’s important that we do something that is sustainable for the long-term and something that will help Iowans take ownership of their own health.”

According to Sue Dinsdale of the Iowa Citizens Action Network, Branstad’s plan will cost state taxpayers more and provide less coverage to recipients.

“The fact of the matter is that Medicaid expansion is simply a better policy than TerryCare,” Dinsdale said during a separate news conference in Des Moines.

Starting Wednesday, Dinsdale and others will travel to Mason City, Waterloo, Cedar Rapids, Davenport and other cities around the state on a “Medicaid Madness” tour to denounce what they’re calling “TerryCare” and tout the expansion of Medicaid to tens of thousands of uninsured Iowans.

Twenty-nine-year-old Justin Anderson of Clear Lake was working full-time, with health care benefits, when he diagnosed with brain cancer. He wound up having to depend upon coverage from a state-financed program provided at just two hospitals in the state. Anderson moved to Iowa City to be near the University of Iowa Hospitals and Clinics for his five-days-a-week radiation treatments.

“It’s a crazy system and I just want it to be fixed and I just would really appreciate it if the government would help us out here,” Anderson said, “not just for me, but for the 17,000 other Iowans who are going to be diagnosed with cancer this year.”

Democrats and Republicans in the Iowa Senate will debate this issue this evening (Monday).  A bill drafted by Democrats would extend Medicaid coverage to up to 150,000 Iowans.