You are here: Home / Agriculture / Norman Borlaug’s birthday celebrated at Hall of Laureates 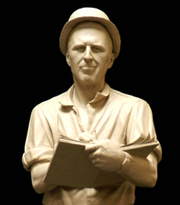 A celebration is going on today at the Hall of Laureates, the building in Des Moines that is the home of the World Food Prize.

“Monday March 25th marks the 99th anniversary of Norman Borlaug’s birth, so there are events going on all day at our building,” according to World Food Prize president Kenneth Quinn.

Borlaug is the Cresco, Iowa native who won the Nobel Prize in 1970 for his work to end world hunger by creating new strains of drought resistant wheat. Borlaug also came up with the idea for the World Food Prize to honor those who make contributions to improve the quality and availability of food.

Quinn says the hall will open at nine o’clock this morning. The events include the airing of the documentary about Borlaug’s life,”Freedom from Famine,” at 11 A.M. and one p.m.

There is also a program at 11 A.M. with Ben Victor, the artist chosen to create the statue of Borlaug that will go into the U.S. Capitol next year on Borlaug’s 100th birthday. The Food Bank of Iowa will be collecting donations inside the building.

“Dr. Borlaug’s portrait is there, and I guarantee you if you come in with some food for the Food Bank — and you look at that portrait — he’s going to have a little bit broader smile on his face when he sees what you have done,” Quinn says.

The Hall of Laureates is in the building that used to house the Des Moines Public Library, but underwent and extensive renovation. Quinn admits Borlaug would probably not liked to have a fancy building honoring him, or events to bring attention to his accomplishments.

“He was never about calling attention to himself, and that’s why I was so appalled when I found out very few Iowans knew who he was, even though he had the Nobel Peace Prize, and the Congressional Gold Medal and the Presidential Medal of Freedom. Only three Americans in all the history of our country have those three awards,” Quinn says.

He says that’s why he pushed to create the Hall of Laureates and to continue honoring Borlaug. Quinn says with the continuing demand on the world food supply growing, we need to keep Borlaug as an example of what can be done to feed the world. Borlaug died in 2009.