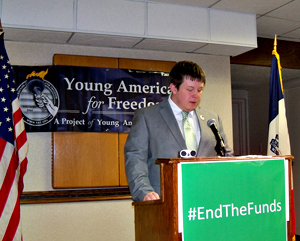 A conservative student group is asking the administration of the Des Moines Area Community College to pull it’s funding from the Governor’s Conference on LGBTQ Youth next month.

Jake Dagel, president of the DMACC Young Americans for Freedom Chapter, says the school’s diversity committee approved the conference even though it includes a session that attacks a conservative activist and radio talk show host, while another attacks those who believe in the bible.

“Any conference or event that attacks individuals for their beliefs is not diversity. We the DMACC Young Americans for Freedom also do not hate homosexuals and believe that the L-G-B-T movement has every right to host this conference due to their First Amendment rights,” Dagel says.

“However, as long as the conference has workshops that attack individuals, we will demand that DMACC revoke its sponsorship of taxpayer money from this conference.”

Dagel says one session of the conference called “Who’s Afraid of the Big Bad Right Wing?” targets individuals such as Bob Vander Plaats, an activist who has fought against gay marriage.

“And then for ‘The Bible Tells Me So,’ is a workshop that questions the truth of the bible — asking if homosexuality is actually an abomination or not. So it is targeting the bible and the truth and we’re using taxpayer and tuition funds to do so and that’s absolutely uncalled for,” Dagel says.

Dagel talked with the media about the groups concerns and asked students to contact DMACC Diversity Commission member Marlana Schnell. Schnell showed up just as Dagel was finishing his remarks, and says the university used one-thousand dollars to purchase tickets for the conference to be sure all students had an opportunity to attend.

“We support activities that build diversity awareness. In general, we support any type of activity that will increase our awareness for our Gay-Lesbian youth who attend — or adults who attend our student body. We want them to feel included and nondescriminated,” Schnell says. Schnell says she had not actually seen the description of the sessions for the conference, but says the school’s administration fully supports them.

Daygel says the conference also promotes a transgender speaker. Schnell says having that speaker is not an endorsement of the lifestyle.

“DMACC doesn’t take a stance in advocating any particular — we are not trying to promote any particular lifestyle — we’re trying to raise awareness,” Schnell says. “So in that case, we might actually have students that are undergoing those sorts of activities that by supporting the conference we are also stating that we understand that we have a very diverse student body.

Tamara Scott of the Concerned Women for American was at the event and questioned Schnell about the impact of a session on the bible toward some students. “They have been bullied throughout time, those being Christian students, conservative students. There have been studies and research done that show college campuses are continually left-leaning and hostile toward those with a conservative and Christian point of view. And why are they not included in this bullying conference?,” Scott asked.

Schnell repeated what she said earlier, that the school tries to promote diversity for all students. “I think we could use this as an opportunity to find that middle ground. And DMACC is as supportive of our right students as we are our left students. So I don’t think that is an issue that you would see at DMACC,” according to Schnell.

The two sides spoke for several minutes in normal conversation about a variety of diversity issues before concluding the event. Schnell says the school will maintain its support of the conference, while Dagel says students will continue trying to put pressure on the school to pull out the tuition and tax money that is supporting the conference.

The conference is scheduled for April 3rd.