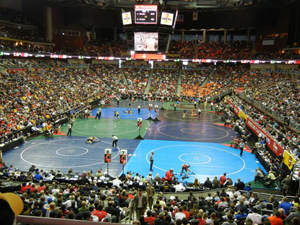 Thousands of people from across the country were in Iowa’s capital city last week for the NCAA Wrestling Championships and the people who helped bring the event to Des Moines say the feedback has been overwhelmingly positive.

Greg Edwards is President and CEO of the Greater Des Moines Convention and Visitors Bureau.

“I think this has put Des Moines on the map for major, major events,” Edwards said.

“I know the NCAA staff was extremely pleased with what we did here and the fans who attended the tournament were extremely pleased. I think we have a real good shot at getting the wrestling tournament back and perhaps some even bigger events down the road.”

Prior to the start of the tournament last Thursday, Edwards pegged the economic impact of the event at $15 million. “We ran some numbers late last week as to what we were projecting to have in and most of those numbers are holding true,” Edwards said.

“We will reevaluate that later this week when we get some further data put together, but for right now, $15 million is where we stand.” Just over 16,000 fans filled Wells Fargo Arena to watch three days of wrestling. Tickets for the event sold out in roughly 15 minutes last March. Oklahoma City will host next year’s tournament.

Host cities for following years have yet to be determined, but Edwards believes Des Moines will be in the running. “We’ll submit future wrestling bids again later this summer,” Edwards said. “It’s our understanding the NCAA will put out their bid specifications and request for proposals sometime in late June and we’ll have to have those back to them sometime in August.”

Iowa State University served as the host school for this year’s tournament. Edwards noted, in addition to a sold-out arena, over 20,700 people passed through the doors of the adjacent Hy-Vee Hall to attend a “Fan Festival.”