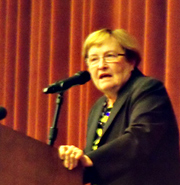 Judge, a Democrat who served with former Governor Chet Culver, says she has been to at least seven of the eight conferences and says the overflow attendance today shows a huge change in attitudes.

“I remember the first couple of conferences, and they were very poorly attended. People were almost concerned about being seen or it being publicly know that they were attending an LGBT conference. Look what has happened. Look how society has changed,” Judge says.

She says the conference is still important even with the change of attitudes. Judge says many of the same problems that existed at the first conference still exist for LGBT individuals.

“Feeling so threatened that they would consider suicide. That they lose their connection to their families and find themselves living on the streets. As long as we have these problems in our schools in our homes there is still a place for us to be here,” Judge says.

Over 800 students, educators and others are attending the conference which runs through this afternoon at the Prairie Meadows conference center in Altoona.