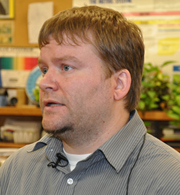 A 36-year-old father of four who attends Des Moines Area Community College (DMACC) in Boone has landed a prestigious scholarship that could be worth as much as $100,000.

Joshua Stevens learned he had received the Jack Kent Cooke Foundation Transfer Scholarship  in a surprise announcement Wednesday on the DMACC Boone campus.

The scholarship will pay all tuition, books, fees and living expenses for the final two to three years necessary for Stevens to achieve a Bachelor’s Degree. Stevens was quick to give credit to instructors at DMACC.

“These teachers we come in contact with, they put so much time in and effort,” Stevens said. “I’m not the smartest guys in the world. I’m a hard worker, but I’m not that smart. I owe it to them…it’s a group effort.”

A class Stevens was attending Wednesday was interrupted when a group that included his 16-month-old daughter, Anya, entered the room and informed Stevens he’d won the scholarship.

In addition to Anya, Stevens has three sons — 13-year-old Hunter, seven-year-old Justin, and six-year-old Logan. Prior to attending DMACC, Stevens worked as a garbage man and in the meat packing industry. He believes the scholarship will greatly benefit his family.

“My boys can see that no matter where you’re at in life, you can anything you want if you’re willing to work for it,” Stevens said. “Hopefully, by setting this course, if I can get to a Notre Dame or Cornell, that will be a new standard for my family and maybe it will open doors for them as well.”

Stevens, who’s married to April Sorbo, grew up in Sioux City and graduated from Sheldon High School. As he mentioned, Stevens is hoping to use the scholarship to attended either Notre Dame or Cornell University in Ithaca, New York. The scholarship, established 13 years ago, is named for billionaire businessman and philanthropist Jack Kent Cooke, who died in 1997.

Stevens is only the second Iowan to ever receive the national award. Diana Upton-Hill, of Bloomfield, won the scholarship in 2003 while attending Indian Hills Community College.