You are here: Home / Human Interest / Iconic Iowa roller coaster being renovated to smooth the ride 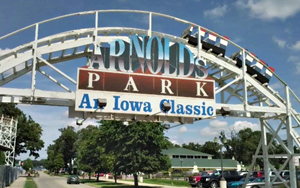 The “Legend” — a 1,500 foot long adventure ride has been derailed by old age and about 30-percent of its track and some wooden floor and catwalks are being replaced.

Arnolds Park general manager, Scott Pyle, is overseeing the ride’s most extensive renovation since the roller coaster was damaged by a tornado back in the 1960’s.

“The message is the Legend is an important part of our business and part of what we do here and we want to make sure it’s here for another hundred years,” Pyle says.

A tall crane lifts the materials up to workers who are fastened to a high-wire in case someone tumbles off. Steve Harold is with Great Coasters International, the company that’s refurbishing the Legend.

“In theory that’s what we’re here to do, to make the ride feel much more comfortable when you’re riding it,” Harold explains. “There won’t be all that bouncing over here and bouncing you over there, it’ll be a nice smooth ride. You won’t come away with a backache.” Decades of shifting and settling, and wear and tear have caught up with the antique.

And the drought has dried out the wood, so the screws and bolts loosen and rattle and it’s a rough ride like a car with bad shock absorbers. Park manager Pyle says it was time for the quarter-million dollar tune-up. He says the improvement will increase the speed at the top of the hill under the sign that warns riders “you can’t go back now.”

“We’ll pick up a little speed down the point of no return, so from the standpoint of the thrill it going to be a little faster right out of the gate,” Pyle says.

As many as 18 passengers hold on tight as the three-car tram whips along the one minute course. On a big day, close to 2,000 people pay $7 to be manhandled by the Legend.

Mary Kennedy is museum curator at Arnolds Park. “It’s a mystique, it’s something about it the people just love and it when children are growing up it’s a real big deal when they get to be tall enough to ride on the roller coaster and it’s a fun roller coaster, it’s a good one,” Kennedy says.

She says the ride opened in 1930. Rival coasters may be higher, faster and more thrilling, but few can match the history of the Legend — it’s one of the oldest, wooden roller coasters still in operation.

The faster, smoother Legend, which may hit speeds topping 40-miles-an-hour, will make its debut when Arnolds Park opens for the season on May 18th.