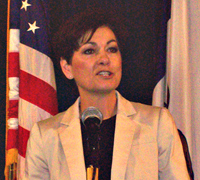 This past weekend GOP insider Doug Gross predicted Reynolds, Ag Secretary Bill Northey and Congressman Steve King all would decide against running for the Senate.

“Doug Gross makes a lot of predictions,” Reynolds told reporters this morning. “That’s just what Doug Gross does, so I haven’t had a conversation with Doug or told him any of my intentions moving forward.”

Gross, a former chief of staff for Governor Terry Branstad, ran for governor himself in 2002.

Reynolds was the Clarke County Treasurer for 14 years before winning a seat in the Iowa Senate in 2008. Governor Branstad chose her as his lieutenant governor running mate in 2010.

“I love public service. I love serving as lieutenant governor,” Reynolds said. “…I think we have a great story to tell in the State of Iowa and I love telling it in whatever capacity that it’s going to be.”

Democratic Senator Tom Harkin announced in late January that he would not seek reelection in 2014 and in early February Democratic Congressman Bruce Braley (BRAY-lee) announced he would run for the senate. Republican Congressman Tom Latham said in late February that he would not run. Congressman King said earlier this month he’s considering it, but that any Republican would face a “slightly uphill battle” in Iowa. Reynolds said she’s talked with King “a couple of times” about the race.

“I don’t know what his time frame is. I think he’ll make (his decision) sooner rather than later and I’m comfortable with that. I’m still talking to people and doing some research,” Reynolds said. “So, you know, my goodness, you know, the deadline’s not until March, 2014, so we have some time yet to make that decision.”

March 14th of next year is the date by which a candidate has to collect and submit enough petition signatures to the Iowa Secretary of State’s office to get their name on the June 3, 2014 primary ballot.