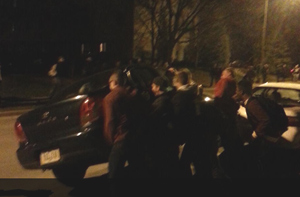 Ames police released this picture of a car tipping on Welch Avenue.

Ames Police Commander Geoff Huff says it was a “fairly typical” VEISHEA aside from the reports of vandalism.

“We had a few cars that were flipped over, most notably in the middle of the campus town area,” Huff says.

“We had 6 to 8 individuals who flipped a car on its side. We were able to get one of them.”

Twenty-two-year-old Joshua Ryan of Spencer is charged with 2nd degree criminal mischief in connection with the campus town car flipping.

Huff says a photo of the incident was posted to Twitter, so they’re using that to try and identify the other individuals involved. Between Friday and Sunday, Ames Police charged 28 people with public intoxication.

“We called in some of our officers a little earlier on Saturday night than we anticipated having to do just because they started throwing some parties early,” Huff said. “We wanted to get out in front of it, before they grew to the point where we’re going to have issues with them. So, we brought in some officers early to go out and start talking to those folks and get things calmed down before it got out of hand.”

Ames Police also responded to an accidental fall involving a 19-year-old from Burnsville, Minnesota. Troy Bentz fell off a five-foot high retaining wall and onto a concrete driveway Saturday night.

He hit his head and was unconscious when officers arrived. Bentz, who’s expected to make a full recovery, is not an ISU student.