You are here: Home / News / Ex-Bachmann staffer says senator asked to be paid to work on campaign

Michele Bachmann’s ex-chief of staff says a state senator who was recruited to be Bachmann’s Iowa campaign chairman asked to be “paid for his efforts.” Senator Kent Sorenson calls the allegation “garbage.”

Sorenson, a Republican from Milo, has repeatedly denied that he was paid by Bachmann’s presidential campaign. That would be a violation of ethics rules in the Iowa Senate.

Andy Parrish, Bachmann’s former chief of staff, has sworn in an affidavit that he knows “for a fact that the senator was paid and representations to the contrary are simply not true.”

Parrish said Sorenson was a highly sought after recruit for Bachmann’s Iowa Caucus campaign because Sorenson is “popular with many constituencies” in the GOP. Parrish has posted email messages on Facebook, indicating Sorenson was paid $7500 a month, from a fundraising firm associated with the Bachmann campaign.

“He can be a consultant and give us strategic advice,” the firm’s principal owner wrote in an email. 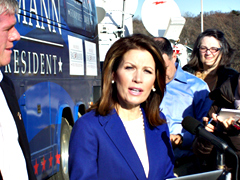 Sorenson has repeatedly said the allegations are “totally baseless.” Today, in a text message to Radio Iowa, Sorenson said: “It is the same regurgitated garbage that they have been claiming and I stand by my previous statements.”

Another Bachmann campaign staffer filed a complaint against Sorenson with the Iowa Senate Ethics Committee earlier this year.

Last week the panel gave “confidential witness A” 10 days to step forward or the complaint would be dismissed.

The secretary of the Iowa Senate says he has received an email, with a link to the affidavit from Parrish, but senate rules require a signed and notarized paper copy to be submitted.

The Minneapolis Star Tribune has posted the affidavit from Bachmann’s chief of staff, along with the email messages Parrish apparently plans to submit to the Iowa Senate Ethics Committee.