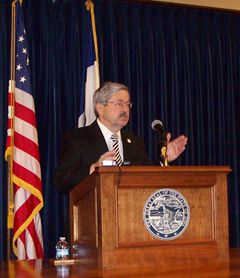 Governor Terry Branstad is mum about a big economic development deal set to be revealed tomorrow.

The Des Moines Register reports Facebook plans to build a $1 billion data center in Altoona, a suburb just to the east of Des Moines.

“We don’t talk about economic development prospects until the people, the company that we’re working with is ready to announce it,” Branstad said this morning.

“We’ve been working on a project for about a year, but I think it can jeopardize the likelihood that these things will happen if they’re leaked prematurely and so we think that’s inappropriate and I’m not going to talk about it until the announcement is ready to be made — and I think Tuesday’s the day it’s going to be announced.”

Google has invested over a billion dollars on a “server farm” in Council Bluffs and Microsoft runs a data center in West Des Moines.

Iowa is an attractive spot for the facilities, with its relatively cheap and available supply of electricity. The Des Moines Register reports the site Facebook is considering in Altoona is near a MidAmerican Energy power station. Governor Branstad was asked about the Facebook project this morning during his weekly news conference. Branstad would only acknowledge it was a “big” project — and he would not say the company’s name.

“We have been working and negotiating with this project, I think, probably for the better part of a year, maybe even more than a year,” Branstad said, “but in a big and important project like that it’s important to maintain confidentiality and to work in good faith and our economic development people have done that with this, as they have on many other projects.”

Branstad will not reveal what state incentives have been offered to Facebook. The governor told reporters to attend the announcement on Tuesday to learn those details.