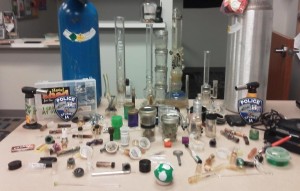 Police in the western Iowa town of Stuart made a rather large drug bust Wednesday night. It happened at the Super 8 Hotel, just off of Interstate 80.

Stuart Police Chief David Reha says more than 50 types of drug paraphernalia and a “large amount” of marijuana was discovered in a vehicle and hotel room. “The officer was actually on a separate call, I can’t really go into what that was, but he’s part of our K9 unit. In the process of him being there, his dog alerted to the presence of narcotics in a vehicle and that’s what led to the eventual findings,” Reha said.

Officers tracked down the owner of the vehicle, a man from Virginia. “He told the officers he was on his way back from a large marijuana festival in Colorado,” Reha said. “It’s kind of a unique situation. I’ve never seen that much drug paraphernalia on one person. It’s very rare to get so much out of one person, especially when they’re on the move.”