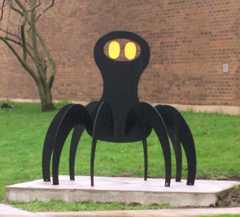 Eighteen pieces of art were installed this week in downtown Mason City as part of River City Sculptures on Parade. Gregory Mendez, a sculptor from Fort Wayne, Indiana, watched as one of his works was set in place.

Mendez says the project has created a lot of talk and provided a great opportunity to showcase public art.

He says the sculptures add to the downtown area, but the project also gives people something arts-related to talk about, whether it’s good or bad.

Mendez says, “For an artist, it’s an extreme honor and a privilege to have your artwork out, right in the heart of the community.”

Mendez says public art installations like these allow people to enjoy art a little bit more than if they were in a formal art gallery.

“When people think of a gallery, there’s a little bit of an intimidation factor that goes along with it, you have to dress a certain way, you have to have a certain kind of vocabulary and it’s intimidating for some people to go into a gallery,” Mendez says. 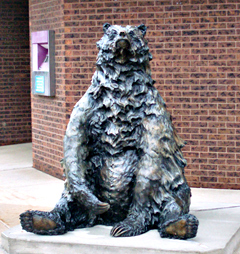 “The great thing about public art is it’s free for people to come up and view and they can view it anytime. The best thing is that it adds a little bit of vibrancy to the downtown area.”

Jacque Frazee, a sculptor from Milbank, South Dakota, had one of his statues installed last fall on the plaza near Southbridge Mall. He says the public has overwhelmingly shown appreciation for the project.

“It’s been a blast,” Frazee says. “We ran around uptown and had several people stop us and ask if we were the artists, and it was just fun, an awesome community.” Artists place their sculptures in the program for one year and all sculptures are promoted to the public for sale.

Artists are eligible to win awards such as Best of Show and People’s Choice Award.