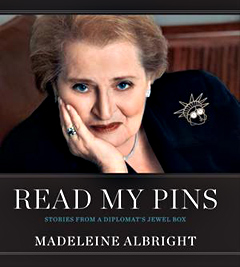 A collection of pins worn by former Secretary of State Madeleine Albright is finding a temporary home at the National Czech and Slovak Museum in Cedar Rapids.

Albright, who was born in Czechoslovakia in 1937, will visit the museum this Friday.

She recalls, in the summer of 2000, attending a summit with Bill Clinton and Russian president Vladmir Putin. At the time, Russia had invaded Chechnya, amid reports of human rights abuses and violations of international law.

Albright, who had become known for her decorative pins that carried symbolic messages in diplomatic meetings, wore a pin of three monkeys representing “see no evil, speak no evil, hear no evil.”

“He kind of looked at me like, are you out of your mind? You are supposed to be America’s chief diplomat and here you are, sending messages with your pins,” Albright said. The exhibit of nearly 300 pins will be in Cedar Rapids though October.

Albright said she hasn’t heard of anyone else using symbolism in their clothing to negotiate, and in that way, being a woman in politics served her well. “I don’t think that men send messages with their ties,” Albright said, “so, I think I did invent something new.”

Albright will visit the exhibit on Friday and meet with local students on Saturday to talk about how she became the first female Secretary of State.