You are here: Home / News / Legislature to be back in Des Moines next week 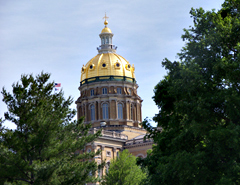 State legislators haven’t taken votes on a $400 million tax package. They haven’t made final decisions about the $6.5 billion state budget plan and there’s no agreement yet on an education reform package.

“I think we had a great week. It would appear that we’re not going to get quite as far as we’d hoped,” House Speaker Kraig Paulsen, a Republican from Hiawatha, told reporters early this afternoon. “We’d hoped to come to conclusion. It appears we’re going to be back next week.”

Senate Democratic Leader Mike Gronstal, a Democrat from Council Bluffs, brushed aside questions about when a vote on the tax plan might happen.

The Iowa House debated for about 20 minutes today, passing a bill that details spending plans for state gambling taxes. That money is primarily reserved for construction projects. The Senate debated the same bill about an hour later, passed it and sent that spending plan to the governor.

Both the House and the Senate have adjourned for the week, with plans for rank-and-file lawmakers to return to Des Moines on Tuesday.