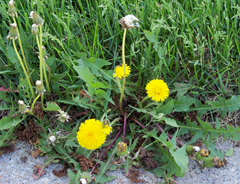 There is nothing dandy about them. Iowans who want a picture-perfect lawn are having to do battle with dandelions this spring.

It may seem like there’s many more of them, but Fech says no. “What we’re seeing is the same number of dandelions but we’re noticing them more because the lawns tend to be thinner as a result of going through the drought,” Fech says.

“We’ve had the perfect conditions for dandelions, really, thin lawns and now a spring condition where dandelion seed that was in the ground has had good conditions to germinate.” While your lawn may look hopeless, as the yellow flowers appear to be in every square foot, it’s possible to make a significant dent in their numbers.

“You would want to apply a combination broadleaf weed killer,” Fech says. “You may need two applications about ten days apart but you should be able to reduce the population, not as effectively as you would in the fall, but at least to some degree.” If your lawn has already been taken over by the weeds, trying to fight them now could be a long battle. 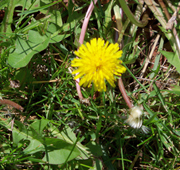 “The best time to control dandelions is in the fall,” Fech says.

“Probably, the second-best time is now. You can have some degree of control but you’ve got to lower your expectations a bit. You want to increase the surface area, so you want to apply a material like Trimec, Weed Free Zone, something like that, half way between your mowing cycle.”

Double-check that you have the correct weed killer for dandelions and mix it according to the directions on the package.

Fech says there’s also nothing wrong with getting rid of them the old fashioned way — with a dandelion digger — just be sure to go deep enough to get all of the root.