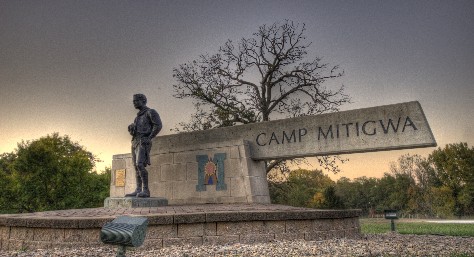 One of the oldest Boy Scout camps in the Midwest is celebrating its 90th anniversary next month and its leaders are searching for long-ago campers.

Todd Eipperle is director of Camp Mitigwa in central Iowa near Boone. He says the camp’s gone through many changes since first opening to Scouts in 1923.

“We started out with 70 acres and we’re up to almost 500 acres now,” Eipperle says. “Ninety years ago, their aquatics program was done in the Des Moines River. Now, we have two in-ground swimming pools and a lakefront — we have our own manmade lake. We have two large mess halls and we used to only have one very small one.”

The staff has launched a search for Camp Mitigwa’s Oldest Camper and the Oldest Staffer, both of whom will be recognized at a June celebration.

“Something that a lot of Scouters take pride in is belt buckles, believe it or not,” Eipperle says. “We have a special commemorative belt buckle for this year and they will receive a 90th anniversary Scout belt buckle for being the oldest campers.”

The camp hosts between 2,500 and 3,000 Boy Scouts every summer, and has for nine decades. That’s about a quarter-million campers over the years. So far, he says, they’ve heard from several of the old-timers.

“We do have one guy who’s actually 89 and he turns 90 in a few months so he’s just as old as the camp,” Eipperle says. “He served as camp director back in the ’60s. I’ve also heard from a few people who say they were on the camp’s staff in the late ’30s.”

The celebration at the camp is planned for June 15th to kick off camping season. To contact Eipperle, call the Mid-Iowa Council at (515) 266-2135 or email him at: [email protected]